On August 8th 1998,the worst disaster on Kenyan soil was experienced. The terrorist bombing of the American Embassy in Nairobi destroyed a seven-storey building nearby. This left over 250 people dead and thousands of others injured. The injuries ranged from simple incisions to massive avulsions, numerous fractures especially from people who tried to jump from the upper floors of nearby buildings and pedestrians with all kinds of injuries
caused by flying shrapnel & pieces of broken glass. 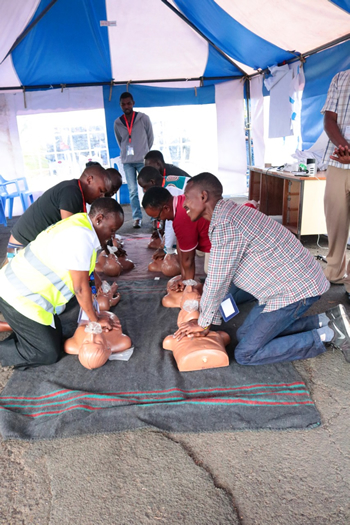 After the disaster, a training needs assessment of the Kenyan rescue teams was done and that led to the first training of Emergency Medical Technicians (EMTs) in East and Central Africa between November 1998 and March 1999. The classes were organised by the International Medical Corps and an instructor from the United States – Mr. Juan Garcia conducted the training. Two groups were trained in Nairobi and Mombasa with forty EMTs each. The EMTs were drawn from St John
Ambulance, Kenyatta National Hospital, Nairobi City Council, Kenya Army and the Kenya Police. The second class in Nairobi had approximately twenty EMTs drawn from Nairobi Hospital, Gertrude’s Garden Children’s Hospital, AAR and AMREF

In 2000, the same group of EMTs were re-trained and upgraded with the assistance of IMC/USAID and once again Mr. Juan Garcia & Dough Pinder both paramedic instructors facilitated the sessions. From that initial group of EMTs, 15 of them were further trained as Emergency Medical Service Instructors (EMS-I). Through these EMS-Is two other groups of EMT-Bs were trained in Mombasa and Nairobi bringing the total of EMT-Bs in Kenya to 152. The EMTs were trained using the Department of Transport (DOT) curriculum as is in the Emergency Care and Transportation – 6th Edition. The EMTs further received training in search and rescue, water rescue, vehicle extrication and incident command System. After noting that there was a need for improving the EMTs skills and knowledge and training of new EMTs, it was proposed that an independent mother body to represent the EMTs interests outside the workplace be formed. That gave birth to the Kenya Council of Emergency Medical Technicians (K.C.E.M.T).  KCEMT that was registered under the Registrar of Societies on March 9th, 2009. Lack of legislation caused a lull in the development of pre hospital structures. In 2008, AAR partnered with USAID to offer partial scholarship for another EMT class in an effort to increase the number of EMT’s. This was a good jump start that placed KCEMT as an oversight body for agencies that train the course. With several agencies running a class, twice every year, the number of EMT’s has steadily grown and currently exceeds 1,000.

KCEMT has accredited training centres that run two classes per year in six counties in Kenya; Nairobi, Kisumu, Kiambu , Nakuru , Machakos and Mombasa.  It trained 18 EMT Basic for the Tullow oil drilling project who also act as volunteers at the Turkana ambulance service. It trained healthcare providers in BLS and ACLS at Bungoma Level 5 hospital and Incident Command System for over 1,000 responders in Kenya and Uganda.

In 2009, the Council developed and delivered the first local EMT training curriculum.

KCEMT in July 2018 partnered with Masinde Muliro University of Science and Technology to run a degree course in paramedicine defining a career pathway in the pre hospital set up. There is an opportunity for young people to develop a career in EMS through training as Emergency Medical Technicians and Paramedics.

KCEMT was part of the team that worked with the Ministry of Health in formulating the National Emergency Medical Care Policy, which was launched on July 7, 2021.

KCEMT alongside the Ministry of Health is in the final stages of developing a standardised curricullum for the training of EMTs.

KCEMT bears a vision of self- realization that Kenya can acquire the capacity to respond to emergencies adequately while at the same time create job opportunities for youth in Kenya in an effort to reduce the rate of morbidity and mortality.